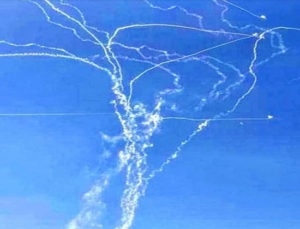 From ten o’clock this morning until noon terrorists from Gaza sent one Kassam after another; not only to Sderot but to all the communities that surround the Gaza border; since noon there has been sporadic attacks. There were reports of minor injuries and minimal property damage but the trauma of going through today’s escalation is the same, taking its toll on everyone. Over 300 kassams have been fired today and outgoing artillery fire from the IDF can be heard.

We, well not “we” but YOU were able to help ten families celebrate Passover. In the days leading up to Passover we prepared ten envelope with money and we started making the deliveries.

There was the teacher who has five children told us “You don’t know how much this will help.” Then there was the disabled man with his family of 5; next, the maintenance worker with his family of 6, next was the Grandfather raising his grandchildren; then the lady who has cancer; there were two families who although they work would be considered “working poor”; then to the family of 7 whose husband/ father suffered permanent injuries due to a traffic accident and lastly to the elderly widow.  Missing one…

The same sentiment as the teacher of five was echoed by them all in person and in subsequent phone calls. We receive the phone calls of thanks and gratitude and experience the joy on their faces as we give them YOUR gifts; If only there was some way to convey to you how your love for support for the people of Sderot helps these people! Pictures might help but there is the issue of the dignity of the people we help. Unfortunately not everything we do and everyone we help is a photo op. From the bottom of our hearts and especially from those you helped… THANK YOU!

In the morning as we were celebrating Shabbat, terrorists from Gaza opened up a two hour rocket attack not only on Sderot but on all the surrounding communities a well. There were over one hundred alarms and rocker fired. Iron Dome met the challenge and took out the majority of the terrorist rocket before they could do any damage.

There have been reports of people injured and others have been treated for shock. There has been moderate property damage along the border as well. People are not the only ones who suffer through these attacks. As soon as the first alarm went off and my family made their way to our bomb shelter so did our dog and cat and they did not leave the bomb shelter for the rest of the day. In days past family pets have been injured and killed by the terrorist rocket attacks. We all are targets, every man woman, children and yes even our family pets.

With Passover behind up we now look forward to Succoth, not that it is the next holyday but because it is the next holyday where people will need help. This year Succoth starts the day after Shabbat and ends the day after the following Shabbat, which means there will be four major meal within a nine day period. As with the people you helped for Passover there will be others who will need help for Succoth.

With Succoth only five month away now is the time for us to start planning. We are only able to help anyone because you care and you make it possible for us to do all we do. We would like to thank you in advance for your continued support.

This newsletter (totally unintentionally)  is indicative of our lives here in Sderot… we started the newsletter talking about those we helped for Passover or we start our day and then it it interrupted by the terrorist attacks. After the attack is over, wheather a few hours or day, we once again go about our  our lives as much as normal, or continue this newsletter and talked about Succoth.

We live our daily lives, which do get interrupted by terrorist attacks and once they have stopped we go back to our daily routine.  The attacks really never end and our lives never go back to “normal” because there is nothing normal about the way we live.

Through your love and support we are able to help those who are in need and have gone through eighteen years on ongoing terrorist rocket attacks. When we ask for your support, it come from firsthand knowledge of what it is like to live in Sderot… I have lived here in Sderot for 13 years, 3 wars and about 8-9000 kassam rocket attacks… I know what the people are going through and they truly need your prayers, love and support.

Worst One Day Attack EVER