The Religious New Year started off with a “Bang”, but not the type anyone was hoping for! 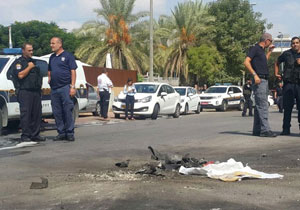 Around 10:25 this morning while I was installing some wall stickers at the school we have been working on the “Tseva Adom” alarm sounded. I made my way from the library to the hall way where there are no windows.

With the alarm still sounding, the school principal made his way through the children and head outside to make sure there were no children outside who might have been panicked and instead of running inside froze in place outside. 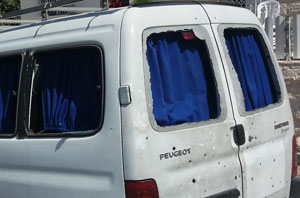 The impact of the Kassam was heard all around Sderot and that was when cell phones started ringing with loved ones checking to make sure everyone was O.K., my cell phone was no different. My wife told me that the Kassam landed by my friend’s house and her brother’s house.

When I had finished my work at the school I went over to my friend’s house. I thought my wife said the Kassam landed in his neighborhood but it had landed just outside his front yard fence.

Sometimes we become complacent and my friend didn’t’t even get up from the chair he was sitting on in his front yard at the time. The only thing that saved him was that cement and stone wall between him and the Kassam. My brother-in- law, who lives next door, was on his way to the hospital as two of his daughters were transported by ambulance, suffering from shock as was my friend transported to the hospital. This is the third time a Kassam has fallen by their home. My brother-in-law was injured by the first Kassam and is now 80% disabled. 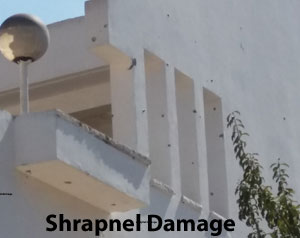 In our last newsletter, which just went out yesterday I told you that ISIS was making their way into Gaza… and guess who claimed responsibility for today’s rocket attack… you guessed it, ISIS-linked Salafi jihadists in Gaza.

Since this morning’s terrorist attack we have several loud boom which sounds like outgoing artillery fire from the IDF. We will keep you posted as we learn more.

As of the posting of this there was no word from the hospital about anyone yet.