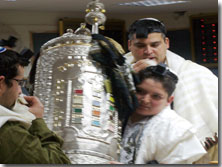 It was 7:30 Thursday morning as we made our way to celebrate a Bar Mitzvah for Afeek, the son of friends we have met here in Sderot.  The place of worship is a bomb shelter which was converted into a synagogue.  Atop the synagogue sits not your traditional Magen David (Star of David) or Menorah, but rather a set of public address speakers used to warn the people of Sderot that a Kassam rocket has been launched from Hamas Terrorists in Gaze and you have fifteen seconds to run and find cover.

As talites (prayer shawls) and tefillin (a pair of black leather boxes containing scrolls of parchment inscribed with bible verses) were being put on and as morning prayers were beginning to be recited, the first “Tseva Adom” of the day sounded. Afeek and the rest of the men in
the synagogue were not phased by it as they continued with their morning prayers.

”Great peace have those who love Your law, and nothing causes them to stumble.” Psalms 119:165

Afeek was accompanied by his father and both grandfathers as the Torah scroll was taken from its place to be opened and read by Afeek publically for the first time.  As the Torah made its way to the alter, the men of the synagogue kissed the Torah Scroll.

In the midst of a war and two Kassam rockets, once again this commandment was fulfilled as a proud father, two proud grandfathers and a host of relatives and friends witnessed Afeek take that step from boyhood to manhood.