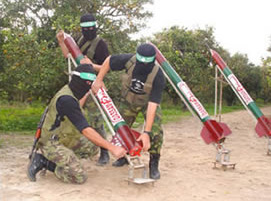 A day after a massive barrage of rockets and mortar shells were fired by Gaza terrorists at southern Israel, attacks resumed on Thursday with two Kassams hitting the western Negev in the early afternoon, and two morning landing in the evening.

No casualties or damage were reported in either attack.

The latest attacks came as Israel decided to keep the crossings between Israel and the Gaza Strip closed following Wednesday’s bombardment, which ended with a Kassam rocket landing near a Sderot cemetery.

Late Wednesday night, an IAF airstrike, also a response to

the barrage, killed a Palestinian gunman in northern Gaza.
The army said it identified a rocket launching squad and fired in its direction. Dr. Moaiya Hassanain, a Palestinian Health Ministry official, confirmed that one person was killed and the Islamic Jihad identified that man as a member of the group.

Hamas fired approximately 45 rockets and dozens of mortar shells at the South on Wednesday, striking a residential area in Ashkelon and areas outlying Sderot, in retaliation for an IDF special forces raid launched against an underground arms tunnel on the Gaza border Tuesday night.

No casualties or damage were reported throughout the day, as residents of the western Negev fled for cover after hearing the Color Red rocket alert activated by the heavy shelling.

A military source described how the IDF had received intelligence leading to the tunnel’s discovery. He said that uncovering the “ticking tunnel” led to a consensus view among decision-makers that action had to be taken straightaway, in light of the tunnel’s imminent intended use to kidnap IDF soldiers.

The IDF said six of its soldiers were wounded in Tuesday’s operation, two of them moderately, requiring hospital treatment, while the remainder were lightly wounded. Six to seven Hamas gunmen were killed, the Defense Ministry said.

Kassam attacks continued in the Sderot area during the evening hours on Wednesday, when a distant thud was heard from the town center around 30 seconds after the Color Red system was activated. Locals sitting outside a cafe quickly filed into the back of the establishment for cover. The rocket landed in open territory, and no injuries or damages were reported.

Despite the ongoing barrages, the IDF Home Front opted to keep schools in the area open and advised residents to go to work throughout the day. Instructions on how to act during the attacks were issued anew.

The source said the decision to launch the raid after sundown on Tuesday was approved and that subsequently the Home Front was briefed over the possibility of the biggest escalation in violence since the June 2007 truce between Israel and Hamas went into effect.

After crossing into Gaza, soldiers encountered several Hamas gunmen standing around a structure in which the tunnel surfaced. A firefight ensued in which a number of gunmen were killed, before terrorists detonated the large quantity of explosives in the building, blowing it to smithereens.

“We don’t know if the explosives were intended to be used in the tunnel, or if the building was booby-trapped,” an IDF source said.

Addressing Hamas’s ongoing retaliation, the source said: “We hope things will calm down. But if they don’t, we’ll be ready.”

Speaking to The Jerusalem Post, Maj.-Gen. (ret.) Giora Eiland, former National Security Adviser to the prime minister’s office, and the former head of the IDF’s Planning and Operation Branches, said the IDF operation demonstrated how lessons from the kidnapping of soldier Gilad Schalit in June 2006 were being applied.

“It’s very clear this tunnel is similar to the one used to kidnap Schalit,” he said. “This is one of the lessons a committee which examined the Schalit kidnapping called for. What was done yesterday should have been done two-and-a-half years ago,” Eiland added.

On the other hand, Eiland conceded that civilians were once again fleeing Hamas rockets as a result.

“This is the situation, unfortunately. We don’t have a direct answer for rockets. We don’t control the Philadelphi Route and we don’t control what goes in and out of Gaza. Hence we have a very serious and threatening military situation [in Gaza]. The only way of avoiding these rocket capabilities being turned on us is to create deterrence, which is not going to happen,” Eiland said, adding that Israeli deterrence had been lost during the cease-fire with Hamas.

During a visit to the IDF’s Gaza Division, Barak described the operation as a success, saying an attack tunnel found 250 meters from the Kissufim border crossing was destroyed. He praised the understanding of local civilians who have had to face the subsequent rocket attacks after months of peaceful daily routine.

“Behind me stand children from the Nahal Oz school, and we must stress that the residents responded very well after a prolonged period of calm. We have no intention of violating the calm, we would like to continue it, but in any situation in which an operation against IDF soldiers or civilians in the Gaza Strip needs to be neutralized, we will act,” he said. Barak added that the “IDF is preparing for all scenarios, including the possibility that we will need to initiate in order to block a [Hamas] operation. In the meantime, we are exploiting the calm in order to prepare and to bring Gilad Schalit home.”

The Defense Ministry’s diplomatic-military bureau chief Amos Gilad said on Wednesday that the threat posed by the tunnel amounted to a “totally unreasonable risk,” and added that “it was worth making every effort to thwart it.”

Speaking to Israel Radio, Gilad said that the special forces raid followed a decision to eliminate any immediate threats to IDF soldiers. “I don’t believe this marks the end of the truce,” he said, adding that Hamas still had an interest in maintaining the cease-fire