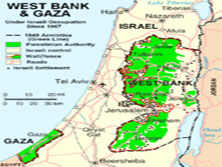 There were thirty Kassams fired from Gaza in the month of July, which brings the count up to 800 since the January 2010 third cease fire and a total of 330 since the beginning of 2011. Taking into account the two month lull in May and June, with only 6 being fired during that period, that comes out to almost two a day for the remaining six months of this year.

This week the Iron Dome has been redeployed to the area. The terrorist from Gaza have been firing longer range rockets targeting Ashkelon and Kiryat Gat, which the Iron Dome is able to intercept.

With a possible UN vote that would recognize a Palestinian state that would be carved out of Israel just around the corner, Israeli security forces are gearing up for the possibility of civil unrest and violent protest by Palestinians if and when that recognition happens.

PA President Mahmoud Abbas ahead of a UN recognition vote has directed his security forces to be on alert. Abbas himself has scheduled rallies in Ramallah, which he hopes will be peaceful.

In a recent report published by Haaretz.com, Fafo, a Norwegian based international multidisciplinary research foundation, found that seventy three percent of Palestinians in both the West Bank and Gaza were in favor of peace negotiations with Israel and that sixty one percent support halting rocket attacks from Gaza against Israel… encouraging numbers.

There are approximately 1.54 million Palestinians living in Israel. If seventy three percent are in favor of peace that leaves 415,000 Palestinians not in favor of peace with Israel and 600,600 who think Kassams should still be fired at innocent men, woman and children. If you take just one percent of each group you still have a substantial threat to Israel if the UN recognizes a Palestinian state. A state with borders based on what, 1947 Armistice line or the 1967 “Green Line”?

The armistice agreements were not creating permanent borders. The Egyptian-Israeli agreement stated “The Armistice Demarcation Line is not to be construed in any sense as a political or territorial boundary, and is delineated without prejudice to rights, claims and positions of either Party to the Armistice as regards ultimate settlement of the Palestine question.”

The Jordanian-Israeli agreement stated: “… no provision of this Agreement shall in any way prejudice the rights, claims, and positions of either Party hereto in the peaceful settlement of the Palestine questions, the provisions of this Agreement being dictated exclusively by military considerations” (Art. II.2), “The Armistice Demarcation Lines defined in articles V and VI of this Agreement are agreed upon by the Parties without prejudice to future territorial settlements or boundary lines or to claims of either Party relating thereto.” (Art. VI.9) [8]

The armistice lines were technically not borders, consequently any land acquired in the war of 1967 was just that and the term “Occupied land” when referring to the nation Israel is misleading and incorrect. If you have the time please click here to watch a video by Israel’s Deputy Minister of Foreign Affairs Danny Ayalon as he explains where the terms “West Bank”, “occupied territories” and “67 Borders” originated and how they are incorrectly used and applied.