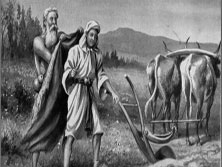 “So Elisha turned back from him, and took a yoke of oxen and slaughtered them and boiled their flesh, using the oxen’s equipment, and gave it to the people, and they ate. Then he arose and followed Elijah, and became his servant.”

For Elisha, the days of plowing fields were over. The call from G-D he heard, the touch of the prophet was felt, the mantel had been passed. The point of no return for Elisha had begun; the line in the sand had been drawn, or was it?

Elisha still had his free will and he had the option to either hear the words of Elijah, receive the call of G-D on his life or not. It was up to him just like it is up to you and to me when we hear the call of G-D to go somewhere, to do something, to give something or what ever it is G-D is asking us to do for him.

What will we do when our name is called? Elisha kissed his mother and father goodbye, took the very tools of his trade, set the ones that could burn on fire and barbequed the rest, there was no turning back He so- to –speak bought a one way ticket.

This is a scary thought for some, it may even be a crippling thought for others and to others a long awaited opportunity. The fear so many times is if I commit my life to G-D I will wind up in some country eating bugs for dinner… and those who have been called to do that have been given the grace to do that; but not all are called to do that.

Is the call simply to show the love of G-D to a neighbor or an elderly person, maybe it is becoming a big brother or a big sister or serving in a soup kitchen, donating to an organization G-D has put on your heart or as a volunteer somewhere.

Whatever it is, are you willing to cross the point of no return for the L-RD? Keep in mind that the L-RD will never ask of you something that He will not equip you for or give you the tools you need to complete the task at hand.

When you finally buy that one way ticket and you get to where you are supposed to be you will find peace that you did not have until you got there. It may not be a bed of roses but you will have peace and joy. The tools you need, the grace to do the job He has called you to do, all of it is just sitting waiting for you just over the line, over at the point of no return.