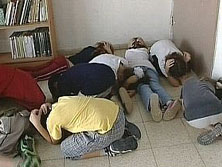 “Tseva Adom” rang out on Wednesday after Hamas leaders called for a third intifada. Within hours of that call, at 8:33 p.m. a terrorist Kassam rockets was launched at the citizens of Sderot.

The residents of Sderot were awakened from their sleep at 1:14a.m. by the shrill sound of “Tseva Adom” as the second terrorist rocket attack was carried out on innocent men woman and children here in Sderot

The two attacks were vivid reminders of the life we live in Sderot. Two people were sent to the hospital suffering from shock, one of them was a young girl.

Latter on Thursday afternoon, a third Kassam rocket slammed into a green house in the small southern agricultural community of Moshav Netiv Ha’asara killing one worker and sending his coworkers into shock as they witnessed the death of a friend, as the Kassam exploded.

Once again in the local news reports you read “none injured” and it drives me a little more crazy then hearing “Tseva Adom”. During periods of heavy attacks most resident shift into the “survival mode.” Then, when things quiet down, you see an increase in the number of people applying for mental health services. Thirteen and fourteen year old children sleeping with mom and dad at night, bed wetting, behavioral problems in school, the fear of going outdoors to play. All of these things happen when it is quite, when it is out of the view of the media and of the world… how can anyone say “none injured”?

After living here for a little over a year and a half, and experiencing numerous Kassams and “Operation Cast Lead,” I can tell you first hand that every time you hear “Tseva Adom” the thought of, “Oh please G-D don’t let it hurt”, “Save your people” or “Father have mercy” comes flooding in.

Then there are the times, as you are walking, driving or just sitting typing a web site update that you hear in your mind “Tseva Adom”. Perhaps a dog barked or a door was slammed, both of which make a sound similar to when the “Tseva Adom” alarm first clicks on. If these types of things are experienced after only a year and a half, what do the people of Sderot, that have lived here all their lives feel like when they hear “Tseva Adom”. What about the children that are nine years old and younger, all their lives they have lived with this fear!

Hope For Sderot is committed to the calling of the L-RD G-D of not only Israel but of the entire universe and beyond, to help what could be called by today’s standards “a dysfunctional city”, those who have been injured both physically and mentally by years of terrorist attacks.

Whether with food or paying a “disconnect notice” from the power company, maybe just a smile or a listening ear, whatever HE calls us to do, to give, we will do as long as He wants us here sharing His love.

I know times in the States are tough and many people are suffering as never before… now throw a few hundred Kassams in the equation and all that that brings … now you have a glimpse of life in Sderot!